As it was necessary to renew all internal floors I decided to install an underfloor heating system powered by hot water from the wood burning stove back boiler.

It has proven to be so effective that I would most highly recommend it to anyone renovating their house. 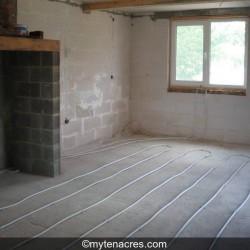 The system is maintenance free, provides a steady heat throughout the house even in the coldest weather, is cheaper to install than  radiator central heating and provides some distinct advantages.

The principle is simple: water heated by a boiler (in our case the back boiler of the stove) is pumped through pipes under the floor with a distribution manifold controlling the rate of flow to each room of the house.

As there are no pipe joints below the floor, there is no chance of leaks.

I chose to install a closed system with a diaphragm expansion tank as it minimised the amount of limescale build up in the circuit. With an open header tank system there is some loss of the original water which is replaced with fresh water which brings additional limescale with it.

Weighing up the options for home heating

In the absence of mains gas, the principal choices for home heating in rural Bulgaria are wood burning stoves, electric heater or air conditioning units which can both cool and heat.

Air conditioners here are relatively inexpensive but were a non starter for us because of high running costs, ineffective heat distribution throughout the entire house, power cuts, and expensive damage to the unit from under voltage power supply which is quite common here.

The cheapest wood burners have no back boiler and heat the room via conduction and convection. Units with water jacket back boilers can be used to power radiators, or as in this case, an underfloor heating system.

Fitted carpets are not common at all in rural homes, and flooring is most often ceramic tiles or some form of vinyl flooring.

Tiles are far easier to keep clean in a hot dusty summer, but can be extremely cold in the winter, sapping heat out of the room.

Research has shown that keeping the lower body warm has a profound effect on the overall feeling of comfort within a heated environment, and this is where underfloor heating really excels.

In contrast, radiators primarily function by convection, heating the air around them which rises to the ceiling before cooling and falling again. Thus the room is heated from the top down, rather than the bottom up and a great deal of air movement is involved.

Underfloor heating is like having the entire floor as a gigantic radiator which is warm underfoot.

The pipes are normally laid onto insulation, but I chose to insulate beneath the floor slab rather than the pipes themselves. This means that some of the heat is absorbed into the concrete slab which then acts as a thermal mass, keeping the floors warm even after a day or two without a fire.